More than 100 homes protected from flooding in Northway and Marston 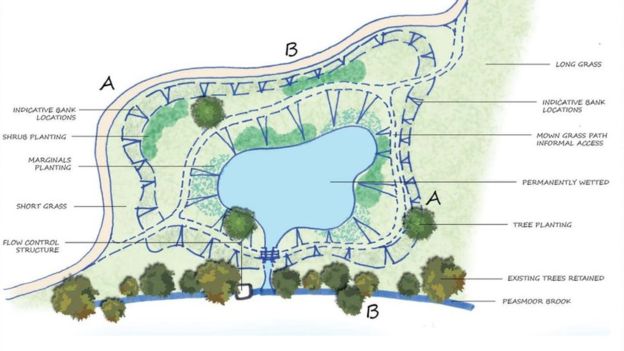 The City Council started work on the £2.2m Northway and Marston Flood Alleviation Scheme in November 2016.

It means that the 110 homes are now at a significantly reduced risk from surface water flash flooding.

Northway and Marston have been hit by flash flooding in the past due to their close proximity to Peasmoor Brook and the Headington Hill Tributary.

It can take as little as half an hour of torrential rain to cause flooding of homes in the areas.

In the event of a torrential rain, water will now be channelled into the three temporary flood water storage areas, and then released into the drainage system and waterways at a pace they can cope with.

Protective fencing at Northway Community Field and Court Place Farm Recreation Ground will remain in place until the end of August 2017 to allow new grass seeds and wildflower seeds to establish.

Trees and shrubs will then be planted across both sites during the autumn planting season.

The new FA-compliant and full-size football pitch in Northway Community Field will open in January 2018.

Labour City Councillor John Tanner, Executive Board Member for a Clean and Green Oxford, said: “I am thrilled that this flood-prevention project has now been completed by our City Council workforce.

“We know how horrendous it is having your home under water and now it is much less likely that homes in Northway and Marston will suffer from flash flooding.

“Oxford City Council is not the flood authority but we listened to community need and did what needed to be done for the good of our residents.

“I would like to thank residents for their patience and support during the construction works and I hope they enjoy the new nature reserves when they open in September.”

Nick Reid, Flood and Coastal Risk Management Advisor at the Environment Agency, said: “We have worked closely with Oxford City Council to secure both technical approval and a combination of government grant and local levy which provides financial contributions to the scheme.

“This work will reduce flood risk to over 100 properties affected by surface water flooding following heavy rainfall and is a great example of delivering a flood alleviation scheme while allowing open space to continue to be used when the storage areas are not holding water.”

Nigel Tipple, Chief Executive of Oxfordshire Local Enterprise Partnership (OxLEP), said: “We are delighted the flood alleviation project at Northway and Marston is now complete, which will have a positive impact on over 100 homes in this part of Oxford.

“Locally, this investment is significant and -; across the rest of Oxfordshire -; OxLEP is committed to funding projects that mitigate against flood risk, potentially affecting businesses and homes in the county. This includes the sizeable allocation of £25.85m-worth of funding towards the Oxfordshire Flood Risk Management Scheme.”