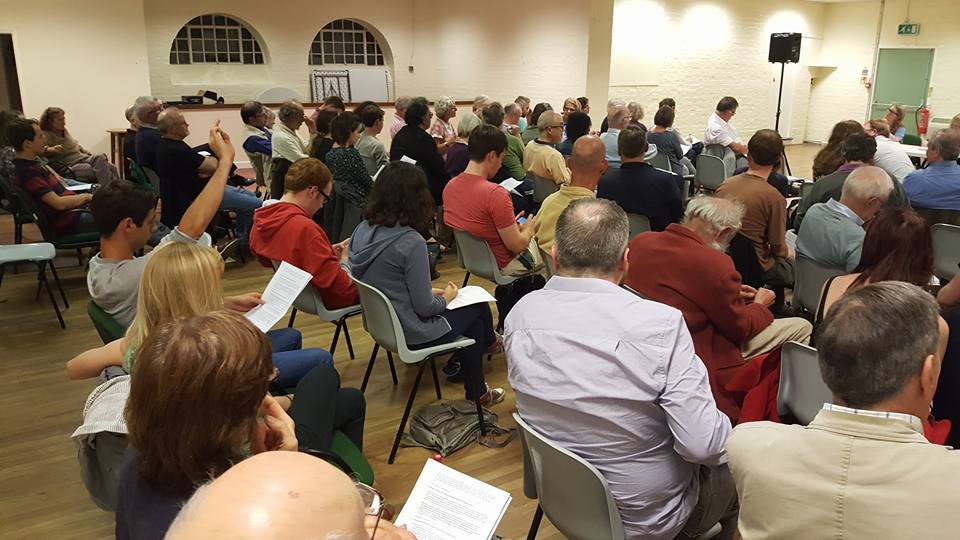 Every Constituency Labour Party may submit one contemporary resolution, which must relate to an issue arising after 5 August 2016, the date by which the national policy forum and NEC reports are compiled.

Four resolutions were received, and at our pre-conference meeting on Friday 9th September, members voted to send the following contemporary resolutions to conference.

Anti-austerity policies can deliver growth and a Labour victory

1. The 9 August National Institute of Economic and Social Research report that Britain’s economy shrank in July, increasing the possibility of recession.

2. The cost of living continues increasing: the ONS reporting on 16 August inflation rising to 0.6% with sterling devalued more than 10% since June.

3. Austerity has not eliminated the government deficit, contrary to Tory predictions.

4. Instead, due to Tory policies, the economy has stagnated.

5. Living standards are declining – real wages down 10.4% since the 2008 financial crisis (the TUC reports), similar to Greece.

6. Labour’s successes this past year in forcing some Government U-turns on austerity policies.

8. The widespread view of voters in 2015 that Labour lacked a credible economic policy.

3. A National Investment Bank should be established.

4. The government deficit should be cut by raising its income – by growth not austerity.

5. To succeed both economically and electorally Labour needs credible fiscal rules, borrowing for large scale investment whilst balancing the current budget over the economic cycle, as proposed by the Shadow Chancellor.

?- The rising tide of cuts and privatisation engulfing the NHS.

– St Helen’s CCG’s proposal (9 August) to suspend all non-urgent care for four months! Although the decision was reversed, the Royal College of Surgeons predicts such problems becoming “commonplace” without increased funding and ending resource-draining, market-driven bureaucratisation.

?- ? Wholeheartedly supporting junior doctors’ and health workers’ fight to defend themselves and the NHS.

?-  Exposing and fighting rolling privatisation and cuts, including the “Sustainability and Transformation Plans”.

?- ?Fully publicly funding both, including by reversing expensive and wasteful privatisation and marketisation; increasing taxes on the rich and corporations; borrowing to invest where necessary.