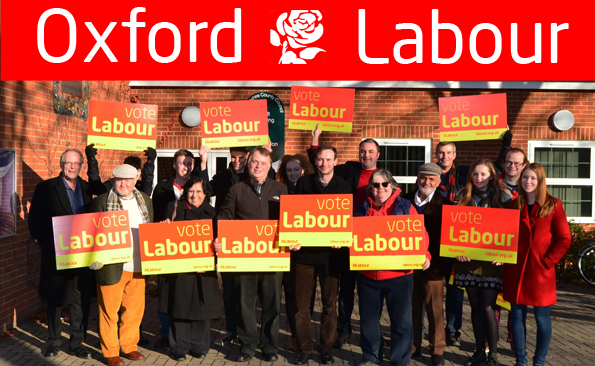 Oxford & District Labour Party is a combination of two Constituency Labour Parties (CLPs), Oxford East and Oxford West & Abingdon. We have a joint All Member Meeting (AMM) each month except April and August to meet and discuss current issues, to hear reports from MPs, MEPs and councillors and to listen to speakers. Many people who joined the Labour Party after the 2015 General Election or during the recent leadership election will have attended an AMM. The AMM is open to all Labour Party members from either constituency, and they can speak and vote on all policy issues including resolutions.

In addition to the AMM, the Party has a General Committee (GC) which is composed of delegates whom are chosen by Oxford & District Party branches and by trade unions, the Co-op party and other affiliated organisations. These are the only members who can vote on certain aspects of party business, including the election of party officers and conference delegates, nominations to the National Executive Committee (NEC) and the National Policy Forum (NPF), constitutional changes and financial matters. Such votes are usually held within AMMs, particularly the AGM, for convenience.

The Executive Committee (EC) consists of officers elected at the AGM and some additional members to ensure that every party branch is represented, together with representatives of affiliated organisations and Labour groups, and is responsible for managing the O&DLP throughout the year.

We are approaching the Annual General Meeting (AGM) season in the Labour Party. In January or early February branches hold their local AGMs where members elect delegates to represent their branch at GC/AMM meetings. Each branch is entitled to one delegate for every 20 members of their branch. Dates and times of upcoming branch meetings are listed below

Branches may also nominate people to serve in various officer roles within the local party, and these elections take place at the AGM in March each year. In 2016 the GC will elect officers and delegates and make nominations within the AGM to be held on Friday 11 March. Because our local party is a combination of two CLPs we try to include officers from each CLP, and the rules require that each CLP must hold at least one of the Chair and two vice-chair positions. In addition to CLP balance we endeavour to have a gender balance of officers reflecting the makeup of the Oxford & District membership, and the rules require that three of the six lead officers -; Chair, two vice-chairs, secretary, treasurer and membership secretary -; must be women.

If you would like to find out more about the nature and responsibilities of each role, click on the relevant link below.

Any member is eligible to stand as an officer or a delegate, and should put themselves forward at their branch AGM. It is expected that delegates will regularly attend branch meetings so they can accurately reflect the feeling of their branches when there are votes for GC delegates only. Similarly officers will be expected to report back to their branches and/or attend other branches to represent the EC to all members.

Follow the links below to our rules and standing orders. If you have questions you can contact our Secretary Ann Black on annblack50@btinternet.com.